[This is the fifth in a series of six posts that will summarize the argument of my recent book, Instead of Atonement: The Bible’s Salvation Story and Our Hope for Wholeness (Cascade Books, 2013). Here is a link to the first four posts in the series.] 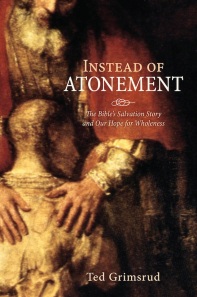 Paul on the need for salvation

The interpreter of the story of Jesus’s life, death, and resurrection who has shaped the generations since most powerfully has been the Apostle Paul. Christian salvation theology has, for better and for worse, tended to be Pauline salvation theology. After examining key elements of Paul’s thought, I conclude that Paul understands salvation in ways fully compatible with the Old Testament and the story of Jesus.

Like his predecessors, Paul understands salvation in terms of God’s merciful intention to bring healing to a broken world. Paul does not present salvation in terms of retributive justice or a mechanistic view of God’s holiness and honor. Salvation, for Paul, is a gift of a relational God who seeks to free humanity from its self-destructive bondage to the powers of sin and death.

Romans 1–3 provides one important opportunity for Paul to spell out his understanding of Jesus as savior. At the heart of the sin problem for Paul is the dynamic of idolatry, people giving ultimate loyalty to entities other than God—with the consequence that instead of experience God’s healing justice, idolators experience “wrath.”

As Paul will make clear in Romans 5:1-11 and 11:32, God’s intentions toward humanity are about salvation. Hence, we make a mistake if we interpret “wrath” as God’s punitive anger directly aimed at people God has rejected. We should understand “wrath” in relation to the gospel. “Wrath” refers to how God works in indirect ways to hold human beings accountable, “giving them up” to the consequences of their giving their loyalty to realities other than life and the giver of life.

The true law exposes the sins of us all. It helps us see when we exchange love for neighbors with trust in idols. At such times, instead of practicing justice we instead practice injustice and violate God’s will for our lives. This problem characterizes Jews and Greeks alike. This is the problem: the universality of the domination of the “power of sin” (Rom 3:9) over all groups of people. Being a member of the empire does not save one—nor does being a member of the religious institutions that had emerged around Torah. In fact, when such membership fosters injustice it has become a curse, a ticket to alienation and idolatry.

Justice apart from works of the law

Jesus’s self-sacrifice reveals God’s saving justice (that is, God’s mercy) that is available to everyone (Jew first and also Gentile) with eyes to see and responsive hearts. The “atonement” (at-one-ment, reconciliation) is not a sacrifice to God that satisfies God’s neediness. The “atonement” illumines the truth that humanity has suppressed, truth that allows sinners to see God’s welcoming mercy clearly. This illumination makes “one-ment” with God possible—not from God’s side (God has always welcomed sinners) but from the human side (when we see accurately we will be freed from our fearfulness toward God that leads to ingratitude and trusting in idols instead of God).

Paul adds no new spin to the Bible’s salvation story. He reiterates what the call of Abraham, the exodus, the gift of Torah, the sustenance of the community in exile, and the message of Jesus have all (in harmony with one another) expressed: God is merciful and offers empowerment for just living for all who embrace that mercy and let it transform their lives.

The salvation revealed by the Lamb

The basic content of the book of Revelation’s revelation concerning salvation is the same as we have seen to be characteristic of the rest of the Bible: God creates and sustains the universe in love; due to choices to turn from God and trust in idols, human hearts have been damaged; the message of salvation proclaims this: simply turn back from the idols and trust in God’s love.

The threefold pattern of Jesus established in Revelation 1:5 sets the stage for the revelation of Jesus Christ that makes up Revelation (see 1:1). This Jesus loves us and has freed us from our sins by his blood. All three components of this sentence must be held together: Jesus’s love, Jesus’s act of providing from freedom, and the role of Jesus’s “blood” in this freeing.

The work of love that Jesus embodies has as its goal the setting free of enslaved creation, especially enslaved humanity. The visions that follow will drive home in powerful ways the identity of the agents and the consequences of this enslavement. John emphasizes at the start that everything Jesus does as God’s agent in our world stems from love and has as its purpose the freeing of humanity from all that enslaves. The “sins” John alludes to here are likely a general reality more than any particular acts. The fundamental sin in the Bible is idolatry, trusting in things other than in God. The consequence of idolatry is enslavement, wherein the idol seduces and controls the idolater.

By “blood” John has in mind the overall life, death, and resurrection of Jesus. That is, it is not Jesus’s literal blood that frees us but what the blood symbolizes—Jesus’s life of freedom from the Powers and idolatry and sin, lived to the end in faithfulness even in face of violence and the most devastating kind of execution. God’s vindication in making Jesus “first born of the dead” reveals to the cosmos that God’s love survives the worst blood-letting of which the Powers are capable.

The key vision of Revelation comes in chapter five. John sees there that the “mighty king” who can take the scroll from the hand of the one on the thrown and win the big victory of human history is the gentle, compassionate, consistently loving, self-sacrificial Jesus who conquers by persevering on the path of love, all the way to the cross and beyond.

Then, Revelation 13 shows: (1) the true nature of emperor worship and all other similar demands for ultimate loyalty made by imperial states, and (2) the need for people of faith to say no even if it means suffering and tribulation. Then 14:1-5 shows the Lamb’s victory and it shows that those who follow him share that victory. The conquering the Beast does (13:7) was, in a sense, illusory. The faithful ones’ actual fate will be to join the crucified and vindicated Lamb that sings on Mt. Zion.

[Part six of this series]

[More writings about salvation and peace]

I live in Virginia View all posts by Ted Grimsrud