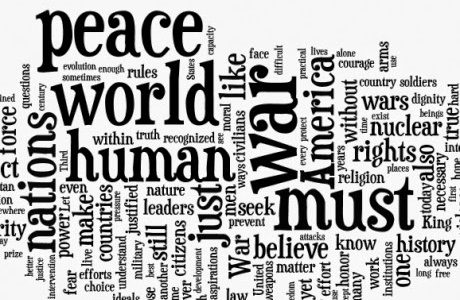 A high percentage of people who are interested in the book of Revelation believe that it is a book about violence and God’s punitive judgment. They take, for example, the imagery of blood flowing for miles as high as a horse’s bridal (14:20) in some literal sense as a vision of a future total war that will destroy God’s enemies and lead to the coming of New Jerusalem. Some of those who interpret Revelation in this way are horrified by such imagery and believe that its presence is a good reason to dismiss Revelation out of hand. Part of the vehemence of this dismissal follows from the presence of many more interpreters who actually welcome this violent vision as evidence that they will be united with God in eternity and that God’s enemies will be condemned to everlasting torment.

I think this future-prophetic approach is simply wrong. It fails to recognize the symbolic character of the imagery of Revelation. Partly this is due to a failure properly to understand the message of Jesus from the gospels as being a message of peace for this world. These interpretations then add another failure to that failure, which is to fail to recognize that the character of the Lamb in Revelation reveals that this imaginative book itself also brings a message of peace. I am convinced that we read Revelation appropriately as being in full harmony with the life and teaching of Jesus presented in the gospels. When Revelation 1:1 tells us that what follows is a “Revelation of Jesus Christ,” it makes a point that is indeed to be taken literally: the purpose of the account of this “revelation” is to help us better to follow the way of the Jesus of the gospels.

The “harshness” of Revelation

Of course, Revelation does contain some harsh appearing imagery (such as the flowing blood of 14:20, the devastating fall of the “Great Harlot” in chapter 17, the destructive sword of 19:11-21, and numerous others). However, the book makes it clear that its governing image is that of the Lamb, who wins the victory the book celebrates with his self-giving love (see especially 5:5-14 and 12:10-11). If we read the book in light of this governing image, then we will come to a different understanding of the “war” that is portrayed in the book—and of the means to fight that war that the book advocates.

The book does use the image of the “Lamb’s war” (17:14). When we note all the other violent imagery, it is understandable that peaceable people would find it difficult to embrace the war image. Several years ago I gave a paper on Revelation at a conference on “compassionate eschatology” (“Biblical Apocalyptic: What is being revealed?”) making the case for the Lamb’s war being a peaceable image. One audience member argued strongly with me, and I never did convince her. I respect her sense that we need to reject the use of war imagery of Jesus because that imagery is irredeemable in our modern world. At the same time, this is the imagery we have, and I tend to think that by embracing the imagery in Revelation and orienting it in light of how the book actually uses that imagery we may find important resources for actively resisting the domination system we live in the midst of. END_OF_DOCUMENT_TOKEN_TO_BE_REPLACED